Caner of the bone or soft tissue:

Rare and fatal. Edwing's diseases is neither benign nor pain free. Cancerous cells form within the bone of imbedded in one's soft tissues. For Lucinda Margaret Grealy, this meant shaming disfigurement, excruciating reconstructive surgery and a life of low self esteem, torment, but inspired recovery. Ewing's Sarcoma is often prevalent in teenager and young adults. This disease is classified by a family of cancerous tumors. 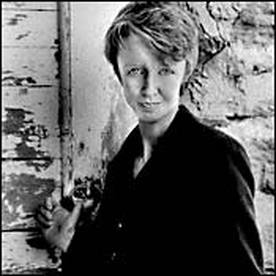 “Does something which exists on the edge have no true relevance to the stable
center, or does it, by being on the edge, become a part of the edge and thus a
part of the boundary, the definition which gives the whole its shape?”

“Sometimes the briefest moments capture us, force us to take them in, and
demand that we live the rest of our lives in reference to them.”

“I used to think that once you really knew a thing, its truth would shine
on forever.  Now it's pretty obvious to me that more often than not the
batteries fade, and sometimes what you knew even goes out with a bang when you
try and call on it, just like a light bulb cracking off when you throw the
switch.”

“This singularity of meaning--I was my face, I was ugliness--though
sometimes unbearable, also offered a possible point of escape. It became the
launching pad from which to lift off, the one immediately recognizable place to
point to when asked what was wrong with my life. Everything led to it,
everything receded from it--my face as personal vanishing point.”

“The school year progressed slowly. I felt as if I had been in the sixth grade
for years, yet it was only October. Halloween was approaching. Coming from
Ireland, we had never thought of it as a big holiday, though Sarah and I usually
went out trick-or treating. For the last couple of years I had been too sick to
go out, but this year Halloween fell on a day when I felt quiet fine. My mother
was the one who came up with the Eskimo idea. I put on a winter coat, made a
fish out of paper, which I hung on the end of a stick, and wrapped my face up in
a scarf. My hair was growing in, and I loved the way the top of the hood rubbed
against it. By this time my hat had become part of me; I took it off only at
home. Sometimes kids would make fun of me, run past me, knock my hat off, and
call me Baldy. I hated this, but I assumed that one day my hair would grow in,
and on that day the teasing would end.